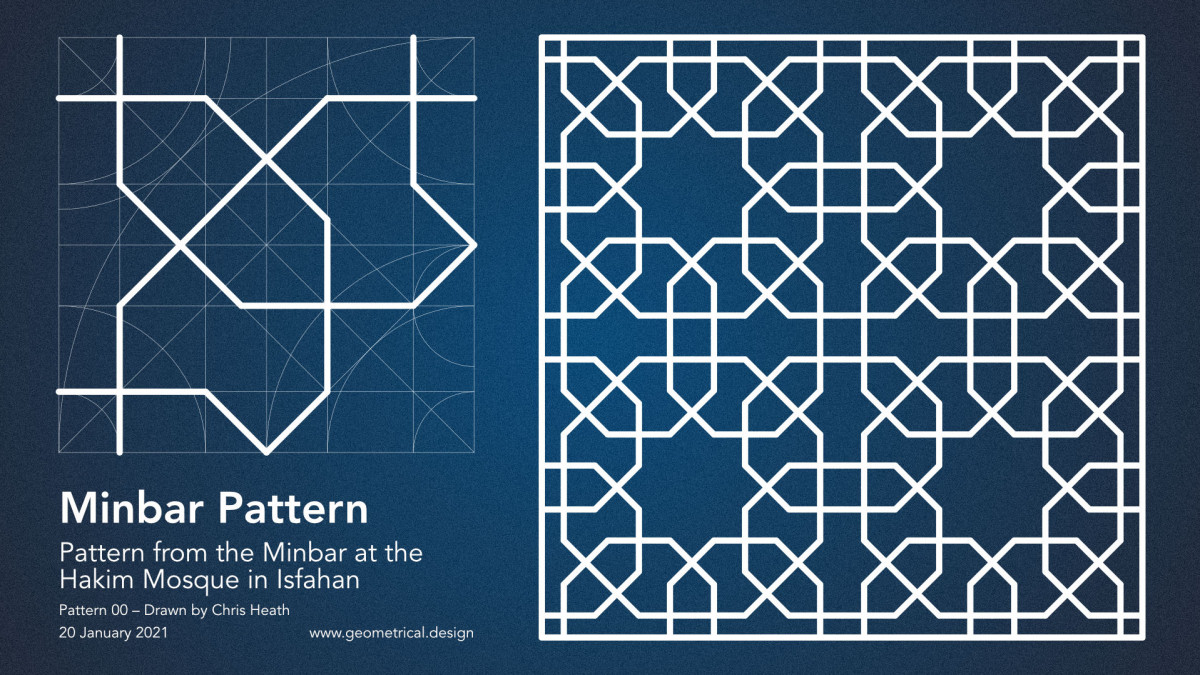 Discover the geometry behind Islamic Patterns and how to create a range of geometric decorative patterns from a simple grid.

The whole exercise of drawing this four-fold pattern from the Hakim Mosque, and it’s variations, gave me the opportunity to further explore the grid that was used to construct these patterns.

First up, I would like to thank Mohamad Aljanabi for teaching me the skills required to:

Second, I’d like to thank Martijn van Bemmel for the challenge. The challenge was in two parts:

"The term 'pattern' necessarily implies a design composed of one or more devices, multiplied and arranged in orderly sequence."

Last of all, I’d like to thank Didier Hannot, who also took up the challenge. Didier challenged me by asking lots of questions, in particular about the following slide that shows the relationships between the grid’s lines and arcs, and dynamic symmetry. In this case the square root of two is the ratio that underlies this pattern. Answering Didier’s questions helped me to articulate what I was drawing, and without his questions, this post would just be a collection of images.

When analysing a pattern, I like to understand the geometrical relationships of the pattern, in particular, the lines that make up what I like to call, ‘the unit-of-repetition’ (below). It is this unit that is repeated through a process of reflection and translation to build the finished pattern.

I am also interested to see if dynamic symmetry, that is root-ratios or the golden ratio, play a part in the layout of the elements (lines, curves, & spaces). If they do, I explore further. If they don’t, I lose interest pretty quickly.

A Practical Method of Construction

As it turns out, with Mohamad’s method, dynamic symmetry plays an important part in the generation of Islamic geometric patterns. It’s these ratios that lend themselves to the efficient use of resources when creating patterns.

Whereas some Western practitioners start with, for example, a circle to create a star pattern, the design that is drawn within the circle is not the unit-of-repetition. As cathartic as it is to follow these methods and see, for example a complete star shape unfold, it is an inefficient method that wastes ink and paper.

While ink and paper are resources we take for granted these days, this hasn’t always been this way. The modern abundance of these resources, along with using software to create patterns more easily, may be the reason why there are a lot of designs that sort of look Islamic, but don’t quite match the original designs that are found on historic buildings.

As far as I can see, these methods lack the checks and balances required to ensure the pattern is accurately laid out. You may still employ these methods to create a copy of a pattern that is accurate in its layout, but the probability of not achieving an accurate reproduction increases. It’s too hit-and-miss for me.

"Method is the outcome of experience gained by deliberate experiments logically pursued along definite lines."

Working within the confines of a square or rectangle also maximises the use of the paper surface, and minimises the amount of ink used. Again, this may not seem so important today, but it does lead to a more efficient design process, so it is still good practice.

Extrapolation of points is also discouraged as this can lead to inaccuracies that are compounded in the finished pattern. Instead, all of the termination points for the finished pattern’s lines are set using the bare minimum of construction lines. Time is not wasted drawing additional construction lines, and this leads to a more efficient and productive design process.

In addition to categorising Islamic patterns into, for example, four-fold, five-fold and six-fold patterns, there is now the potential to categorise these same patterns by the underlying ratios used in a pattern’s grid construction. That is, patterns that correlate with, for example:

None of these variations are necessarily original to me. Many people who use or who have used the method of drawing patterns that Mohamad teaches, may easily create identical patterns.

The variations shown here are just some of the examples of what can be done when using just the one grid to create a number of patterns. I simply don’t know how many more I can uncover because I only spent an hour playing around with the pattern to see what I could come up with.

You can also create a variation of the grid that expresses the same root-ratio, and more designs can be uncovered. If anything, it’s an example of what happens when applying constraints and method to the design process.

Similar to the golden ratio, the root-ratios harmoniously divide space into a combination of symmetrical and asymmetrical spaces where the spaces are related in this case by the square-root of two. Within the grid, the arcs, lines and rectangles are all related to each other by the square root of two.

The root-ratios have the property of being self-same at all scales, similar to fractal geometric patterns like the Mandelbrot set that are self-similar at all scales. It’s this property that makes root-ratios and the golden ratio incredibly useful for constructing seemingly complex patterns in a simple manner.

As I’m sure all, if not many of Mohamad’s students can attest, there is joy in seeing a harmonious complex pattern instantly arise from the application of such a simple, but well-defined process.

By using a pair of compasses and a straight edge, we are subdividing the square and generating these proportions (root-ratios) along with a set of related angles, and you can do this without having to think too hard about it.

In addition to identifying the more obvious relationships in an historic pattern by observing the three-fold, four-fold, five-fold symmetry, these ratios and their visual representations as concentric arcs and root-rectangles provide a means of analysing more deeply, the proportions found in historic Islamic patterns.

One thing that is clear from listening to Mohamad talking passionately about Islamic patterns is there are patterns that are correctly laid out, and there are patterns that are plain wrong. It may sound a bit overly self-assured at first, but the more you follow his geometric methodology and principles, the sounder they become, and the more you begin to appreciate what is a good example of an Islamic geometric pattern and what is a poorly executed attempt at a pattern. I’m no expert, but even after attending Mohamad’s first online course on four-fold and six-fold patterns, I’m starting to notice that there are lot of so-called Islamic geometric patterns on the internet that are missing the mark.

If you want to learn how to create beautiful Islamic geometric patterns, whether that be simple or complex patterns, check out Mohamad Aljanabi’s Facebook Community. You will find a lot of people discovering the joy of creating these patterns. It’s a wonderful and supportive community.